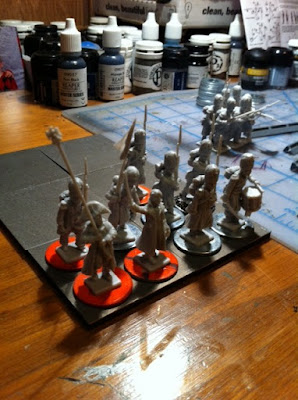 In short, I have been playing historical miniatures games for fifteen years or so (has it been that long!?), mostly WW2 skirmish games, 15mm ACW, and the like. Recently I have been bitten by the Napoleonic bug, in large part due to the gorgeous nature of the Perry Miniatures and Victrix lines of 28mm Napoleonics. I'm playing the French and my friend is playing British. We agreed to do the Waterloo period. With that said, my first purchase was the Victrix Guard Chasseures. Line infantry is going to be my next purchase.

Now I've been looking at rules and I quite like March of Eagles for its ease of play, as well as Sharp Practice skirmish rules. Ideally I want to be able to use both. Given the time and money invested in the miniatures, to be able to use the figures for both games is highly appealing.

With that in mind, and taking note of how others have based their troops, I have decided to go with 2"x2" wood square bases, mounting 4 models per base. Each model is glued on to a round metal washer. A Rare Earth magnet is glued to the underside of the round base, in the whole where a bolt would normally pass through the washer. I have also glued 2"x2" square metal bases to the top of each 2"x2" wood base. So…when I stand each model on the base they hold firm due to the magnets–you can even hold the base upside down and the models hold! Plus, if I want, I can take the models off and use them individually for the skirmish rules.
Posted by Paul L at 8:25 PM

Paul L
USMC OIF vet suffering from mid-life crisis, married with kids, working 9 to 5, and living for the weekend